Quincy
I went to the San Jose Judo Tournament.  When I competed I had 4 matches.  I had fun competing.  When it started I was excited.  My favorite part is when I won one of my matches.  It was my best tournament.  I also liked when I was done because I was tired.  I didn't like it when I had to get out of a pin because it was hard to get out.  That is what I like about my tournament.


Kapono
Hi! I'm Kapono.  I'm going to tell you about the San Jose Tournament.  First I'll tell you what I learned.  I learned to be aggressive and to keep on going, and moving.  You know what I mean? If you don't I'll explain.  My first match I lost because I was stalling.  I got three shidos! My next 2 matches I was WAY better.  My last match I won.  So you see, if you believe in your self you have a better chance of doing what ever you believe.  Now I'll tell you my favorite part.  My favorite part wasn't even the tournament.  It was the five hour drive going there.  You might think it's boring, but for me It was awesome .  I got to watch movies, play video games on the ipad and stuff like that.  Well that's pretty much everything I did.  So I guess that's it!  Bye! 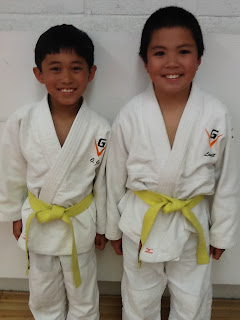 Congratulations to all participants, and thank you to the coaches and parents for their support.   We look forward to next year's tournament!